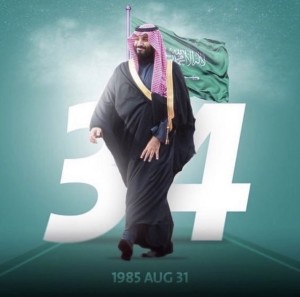 The hashtag “birthday of the leader of renewal”[1] has been trending on Saudi twitter since August 31, celebrating the 34th birthday of Crown Prince Mohamed bin Salman. This is highly unusual and also telling of how MBS sees his future role.

Based on a tradition of the Prophet that goes something like “A nation of many feasts shall not be blessed by God”, Saudi Wahabism long ago decreed that all public celebrations or holidays apart from the two religious festivals (Eid al-Fitr, after Ramadan, and Eid al-Adha, at the end of the pilgrimage) are un-Islamic and therefore unacceptable. Which is why Saudi Arabia does not observe religious occasions — like the birthday of the Prophet (Mawled), or the Islamic New Year — that are widely celebrated as public holidays across the Muslim World. You will never hear a Wahabi scholar wishing believers a “happy Mawlid”. Much the same goes, of course, for national occasions: celebration of Saudi Arabia’s national day (September 23) was long a topic of contention between the royal family and the religious establishment. It was only in the reign of King Abdullah (2005-15) that the national day became a public holiday.

So it goes without saying that the birthdays of Saudi rulers and senior figures were never celebrated or even publicly acknowledged. To see MBS’ birthday widely celebrated and commented on Twitter in this way is a break with both tradition and religious orthodoxy.

But before delving into what it means, it is worth pointing out that, while a hashtag on twitter is not an official celebration, that does not mean it is spontaneous — and this one almost certainly isn’t. No one on Saudi twitter bothered to mention the birthdays of previous Saudi rulers, including MBS’ own father, who is still king, or even of the crown prince himself in the four years since he became the de facto ruler of the country. This hashtag is clearly an organised campaign, launched by the Diwan (which answers to MBS) and amplified by the crown prince’s army of twitter sycophants.

If this very public fawning over the crown prince’s birthday is a slap in the face of the Wahhabi ulema, they must have grown used to it by now. For MBS made it clear from day one he intends to free himself from the shackles of the religious establishment, and that entails changing the very nature of the Saudi regime. The relation between Wahhabi scholars and the House of Saud has formed the bedrock of the Saudi state since it first emerged in the 18th century. The Al Saud have always based their legitimacy as rulers on their religious role, and by extension on the alliance with the religious establishment. To the question of ‘Why should this one family rule this vast land that never came under centralised rule before?’ the stock answer was always: ‘Because they uphold the law of God’. This of course gave the religious establishment a special place, for they are the keepers of God’s seal of approval.

This arrangement was not going to work for MBS, for two reasons. First he needed to free himself from the straight jacket of the religious establishment to modernise the economy, opening it up to foreign investors, new activities (e.g. entertainment) and fully opening the labour market to women. Second, the legitimising role of the ulema worked when the royal family was united behind the ruler. The religious establishment imparted legitimacy on the regime as a whole, i.e. on the royal family, and the family extended this legitimacy to the person it unanimously chose as king. Family unity was long guaranteed by the system of succession decreed by the founder of the modern (third) Saudi state, King Abdulaziz, by which his sons succeeded one another on the throne by order of seniority. This created a stable, predictable and incontestable line of succession that was mapped out for decades in the future. King Abdullah was designated second in line to the throne 30 years before he actually became king in 2005. Today, however, the youngest remaining sons of Abdulaziz are all octogenarians, and it is obvious that Salman is the last one of them to reign. But the Saudi regime had no roadmap for what comes next. Who of the hundreds of cousins who make up the ‘third generation’ is to rule? And on what basis would he be chosen? MBS was not a strong candidate — ten years ago no one would have bet on him becoming king. He just had the luck of being at the right place at the right time, and his rise was fiercely contested within the royal family. He operated what was essentially a palace coup to get rid of the previous crown prince, Mohamed bin Nayef, and his uncle Ahmad still ostentatiously refuses to swear allegiance to him. If MBS is to rule, he cannot rely on the traditional legitimacy of the royal family, he needs personal legitimacy for himself, independent of the family and the religious establishment. He needs to make the people love him.

The search for a new legitimacy

In August 2017, about a month after MBS ditched Mohamed bin Nayef, Saud al-Qahtani, then an adviser at the Royal Court who was understood to be close to MBS,[2] penned an article in the official Riyadh newspaper, under the headline “The Nation State and Ideological Legitimacy”. In it he argued that while “ideology,” (i.e. the official Wahhabi doctrine) certainly played a key role in the unification of the country, it is not what has kept it united since. What really kept the country united is the royal family, he wrote, and its success in leading Saudi Arabia on the path of development. “The royal family is the real legitimacy that has kept this country united and strong,” he went on, “and it is now time for this legitimacy to replace ideological legitimacy in theory and in media discourse; so as to make things clear to everybody”. In effect, Qahtani is arguing for the demotion of religion from its central role in the Saudi regime, to turn Saudi Arabia into an ‘ordinary’ nation state governed by a ruling family that needs no other legitimacy than the fact of its rule. Shortly after it appeared, our own sources confirmed to us that the article did indeed reflect the crown prince’s own thinking.

MBS has been busy turning those words into deeds since. The religious establishment is now effectively marginalised and muzzled. The religious police has been all but dismantled. Religious scholars who dared not so much to oppose but merely to diverge from the official line were imprisoned. Reforms that have long pitted the royal family against the religious establishment (allowing women to drive), or that were simply unthinkable (abolishing male guardianship over women) have been enacted in the past couple of years. Young Saudi men and women dancing together at music concerts is no longer taboo.

Parallel to the demotion of the religious establishment, MBS has been promoting his own brand and personality cult. His propaganda machine has been playing on the resemblance between him and his grandfather King Abdulaziz to brand the young prince as the “second founder” whose reforms herald a new golden age.

Earlier this year, MBS was filmed being asked by a journalist from a pro-Saudi TV station about whether “we are seeing the birth of the fourth Saudi state”, only to answer with ostensible modesty that “we are the prolongation of the third Saudi state”. But this was clearly a case of ‘to ask the question is to answer it’, as the French saying goes. The Twitter celebration of his 34th birthday on August 31 is one more brick in the edifice the crown prince is building to his personality cult. It would not be entirely surprising if, in years to come, the birthday of King Mohamed bin Salman were to be made a public holiday.

It is interesting to note here that, in the first couple of years of his rule, MBS’ birthday and exact age were a (poorly kept) secret and a topic of speculation, probably because the young prince felt his age undermined his credibility in a country long ruled by a gerontocracy and a culture that emphasises respect for elders. Having his birthday and exact age touted publicly on Twitter is sort of a ‘coming out’ for him: he feels confident enough, and old enough, not to have to hide his age.

For all his confidence, this strategy represents a huge gamble for MBS. Muzzling the religious establishment may, overall, go down well with the younger generation and the urban populations — but certainly less so with the conservative tribal population of the hinterland that has traditionally formed the backbone of the regime. Further, eliminating religion as a legitimating factor, in the absence of any real democratic institutions, will leave the regime dependent for its legitimacy to a large degree on the economic situation. If, in a few years’ time, MBS’ economic reforms turn out to be a failure, will there be ulema to tell the people to stick with the regime because, after all, ‘it upholds the law of God’?

[1] ذكرى_ميلاد_الزعيم_المجدد [2] He officially lost the job in November 2018, as he was believed to be implicated in the murder of Jamal Khashoggi, but is thought still to be active behind the scenes.